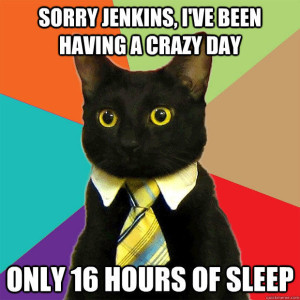 Despite recent claims that cold calling as a practice is officially dead, it’s still one of the most effective ways of filling the top of your sales funnel. By now most of us are never making truly “cold” calls.

There’s plenty of tools at our disposal that can help us learn about our prospect on the fly – see Ecquire and Rapportive – “warming up” that first point of contact.

Still – asking a complete stranger for their time comes unnaturally to most us. Even ultra-successful entrepreneur Mark Cuban had to teach himself to cold call TV repair shops in his early days.

In my 1st sales job, I was cold calling for a whole month before I got comfortable with the process (that’s 1,875 cold calls). In that month, I made it a goal to make these calls fun (my mandatory daily call quota really gave me no other options). Here’s how I went from dreading every new dial to actually looking forward to “crushing it” on the phones.

No, I’m not suggesting that you take a shot for every call you make (though it might certainly take the edge off). Humans are naturally averse to overly ambitious goals for fear of failure. When tasked with a large project it’s best to divide it into multiple achievable daily tasks. Finishing each smaller task gives us a recurring sense of accomplishment which can be channeled to complete the larger project at hand.

Every day, block out an hour in the morning and an hour in the afternoon where you’re doing nothing but cold calling. This means, no email, no Facebook, and no impromptu meetings for the full hour. If it helps, block these off on your calendar so people know not to bother you during that hour.

Software developers hate being interrupted for fear of losing “flow.” The reason for this is simple – when working on a complicated problem, eventually your brain enters a flow-like state where you can process related information faster given the context of what you’re working on. Understandably, productivity is highest during this time.  A single interruption can create hours of redundant work as your brain refocuses on the problem.

As a revenue generating member of the team you should require the same level of focus and discipline. When you’re making the same pitch over and over again eventually it becomes effortless. You speak more eloquently, you handle objections with ease since they’re fresh in your mind, and you begin to focus on specific ways that you can help the prospect as opposed to the words that are coming out of your mouth.

Everything’s more fun with a buddy. In this case it can actually be a useful exercise. If you work on a sales team, conference in one of your colleagues and switch off making calls. This is awesome for a few reasons:

If you’ve ever played an organized sport you’ll know that many teams have a pre-game chant to amp themselves up before the game. It gets the blood flowing and mentally prepares you to go into battle.

Embarking on a cold calling session can feel like war. There’s highs and lows with every call you make but nothing feels better than the victory of speaking to a prospect with whom your product/pitch really resonates.

Back in the day, my team would start making cold calls fairly early in the morning to get in front of hard to reach prospects. As we all walked into the conference room sleepy-eyed and unrested we would huddle around the table and start chanting “Ziggy Zaggy, Ziggy Zaggy, Oi, Oi Oi” as we pounded our fists on the table as hard as we could. While marketing next door was a bit unnerved by this, it did wonders for my team’s moral. We would go from tired to ecstatic and ready to tackle the day in less than 30 seconds.

While ultimately nothing beats proper preparation and relentless practice (if you’re not consistently role playing with your team you’re not utilizing one of the simplest and most effective sales training tools out there), creating a fun environment for the difficult task of cold calling will certainly have a net positive effect. As confidence grows so will your level of expertise as you start to associate pitching with excitement instead of anxiety and misery.